King Mahendra of Nepal died today after suffering a heart attack yesterday the Government announced. He was 51 years old and had been king since May, 1956.

The crown prince had been anointed with Himalayan mountain mud for wisdom, with horse‐stable mud for speed and with elephant‐pen mud for muscle.

After all the preparations had been completed, and at 10:43 A.M. on May 2, 1956, the time selected by the royal astronomers as most propitious the plumed and jeweled $2million crown of the King ofNepal was set upon the head of 36‐year‐old Mahendra. 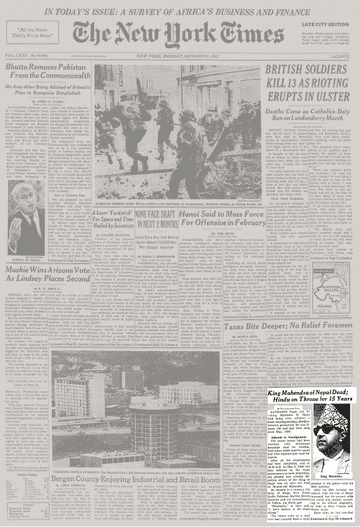 He became in a moment the King of Kings, Five Times Godly, Valorous Warrior Divine Emperor and the reincarnation of Vishnu, the Hindu god.

“Personally,” he later said “I don't believe in all those! things”

The crown came to a many who had virtually been a royal prisoner in the palace until his 30th birthday. Since then he had. traveled more widely visiting the Soviet Union and Communist China as well as the United States.

But throughout his travels and throughout his reign he had adhered to the principal of nonalignment as the wisest policy for a Tennessee‐sized kingdom perched in the Himalayas at 4,500 feet, with India and Tibet as very concerned neighbors.

He broke with tradition in marrying only one wife at time and later forbade any man to take more than one wife unless his wife were childless for 10 years, or crippled insane blind or a leper.

His first wife died in 1950 he married her younger sister, the present Queen Ratna Rajya Lakshmi, in 1952.

Tradition exerted a stronger pull when politics was involved. He was committed at least nominally, to furthering democracy in the largely Hindu kingdom, but in a country with no democratic tradition and almost universal illiteracy, such progress was often halting.

Under Mahendra, Nepal became a constitutional monarchy, with the first elections held in 1959. But the king dismissed the Parliament and tore up the kingdom's Constitution the next year. He then set up a system in which power started at the village level, but with himself at the top of the pyramid.

Political parties were prohibited, a land‐reform program was instituted, border negotiations with China were resolved, but political agitation, allegedly stirred up by pro‐Peking elements, led to the suppression of newspapers and the arrest of many political leaders in 1969.

Nepal has counted itself among the Third World nations under his rule and he himself journeyed to meetings in 1961 and 1964 of nonaligned nations in Belgrade and Cairo.

His eldest son and heir Crown Prince Birendra Bir Bikram Shah Deva studied government at Harvard, and was recently married to Aishwarya Rajya Laxmi Devi Rana his second cousin a memoer of the family that ruled Nepal as heriditary Prime Ministers for more than a century.

Mahendra and his father, Tribhuvana, let a coup against the powerful family in 1951 restoring full power to the royal family despite a brief forced exile. Rana women however, have become the traditional mates of Nepalese kings in a move to insure political peace.